We’re sure you’re already over hearing about how much fun everybody had in Miami, & we couldn’t possibly blame you. We’re even tired of hearing about how Leonardo DiCaprio left the club with every girl in VIP (we were not there), that Solange & Rosario Dawson are probably BFFs now (likely because we were not there), & that Brandon Boyd was signing his prints moments before we arrived at Scope (Incubus, anybody?!). This year was probably the least amount of time we’ve physically spent in Miami for Art Basel, but while somehow still doing the most – yet, without fail, experiencing perpetual FOMO. After several grueling hours of calendar syncing & itinerary drafting, we’ve come to the realization that you just can’t. have. it. all. Cue Liz Lemon.

We did not see Elijah Wood’s DJ set (which is perfectly fine), we did not attend Jeremy Scott’s party in head-to-toe Moschino, we did not see Adrien Brody’s debut of ‘recreational’ pop art paintings (phew), we did not go to Adrian Grenier’s oceanic art gallery (don’t get us wrong – we love whales), nor did we party with the Hilton heiresses, but we did do a lot of other wonderful things to write home about it. Isn’t life a beach!

We saw a melange of some amazing works by day, whether it was within a pop-up art fair, a mural on the side of a building, or in a dark Wynwood alleyway – so much art that it was overwhelming. & we rubbed shoulders with the more humble side of the glitterati by night; the ones who eat at least 2 meals a day & dance with reckless abandon, & we’re going to tell you all about it! We also can offer you a very current trend report: normcore is not dead. Buy your Stan Smiths while you still can!
*Disclaimer: Please note that we did not lug our heavy ass cameras around with us this year, so all photos are taken on iPhone 5s. Proceed with caution.

We went outside of our comfort zone for AB15 & stayed in the quaint little neighborhood of MiMo at the Hotel New Yorker Miami. This is highly recommended if you’re wanting to avoid South Beach & Miami Beach traffic, enjoy a good latke (Blue Collar restaurant is walking distance!), & are generally just into cute boutique hotels & are on a budget AKA can’t quite afford quixotic high-priced (Basel-priced) rooms at the Soho Beach House & need to save your hard earned cash for the $20 cocktails you’re about to start drinking at noon.

Here began our nonstop 3-day party (see #baselthatassup). This is also where we learned how to be poncho chic.. Did we mention it stormed the whole time? :)

We headed over to the Deauville Beach Resort for Art On Paper where saw some sculpture work by the late Stephen Antonakos, a pioneer in neon art since the 70s.

We also spent a lot of time in Oakland’s Chandra Cerrito Contemporary‘s gallery admiring the works of Esther Traugot & Randy Colosky. Traugot’s tiny crocheted additions to these found objects focus on our symbiotic relationship with the natural world, where Colosky’s rigid sculptures tend to be more dystopian. 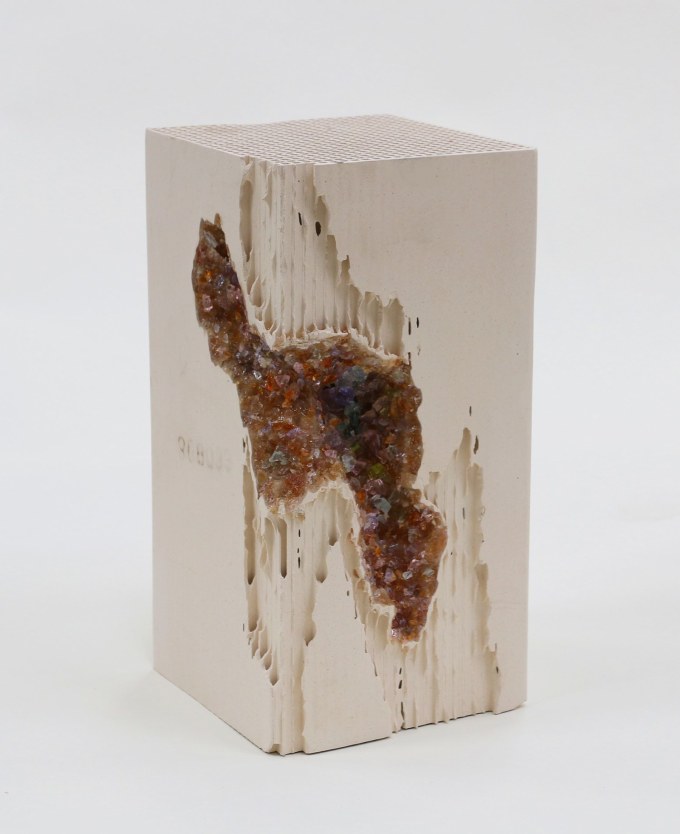 After a few hours gallery hopping & exactly two vodka-in-whole-coconuts cocktails later, we ventured off to the Nylon x White Girl Rosé F*CK Winter Party with The Fat Jew. Here, we ate breakfast burritos for dinner (the theme was night brunch, hence our attendance), failed at a photobooth (see below), & drank White Girl Rosé with a bunch of white girls. Then we ventured off to see Giorgio Moroder (king of disco) at super exclusive club, Basement, downstairs at the Edition hotel – where everyone wears white & everything is made of carrara marble, even the toilet paper. Because we were having sooo much fun in this Studio 54 time warp, we missed New Zealander Connan Mockasin‘s set at Bardot across the bridge – which we plan to make up for later in our adult lives (stay tuned). We wrapped up this casual Thursday evening at the Baby’s All Basel party, hosted by Brooklyn’s Baby’s All Right x Poplife, where we continued to dance the night(morning) away to Kindness‘s DJ set … all while Dev Hynes was sitting in the corner. 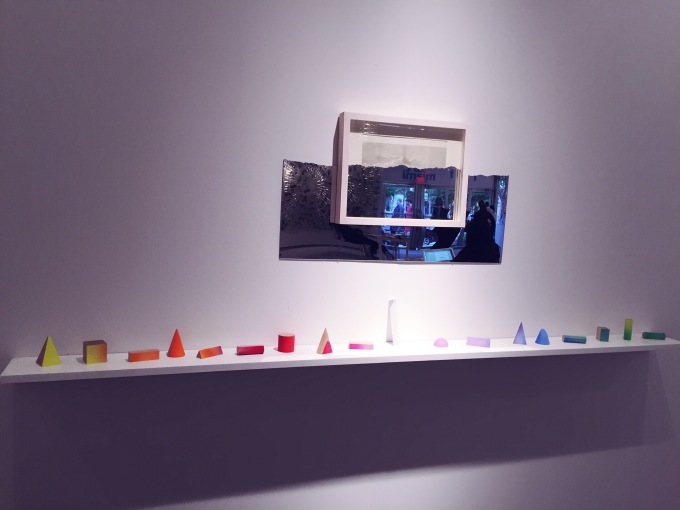 *For those of you who are wondering, we did not get stabbed with an exacto knife at Art Basel, & our deepest sympathies go out to the victims.

After hours of absorbing Context, it was time for pounding the pavement. & tacos. Without a dull moment, we bounced around from boutique to gallery to sidewalk market to sidewalk-sitting-&-people-watching & over some ‘Fart Basel’ wall tags all the way to Wynwood Walls where we met some familiar murals as well as a new installation from our favorite French street artist, Fafi.

At this point all of our batteries were drained, so we went to local artist Jessy Nite‘s exhibit Feels Like Home where we literally charged our batteries! The artist created a cozy, intimate lounge for respite from the non-stop art consumption, plus an opportunity to get up close & personal with her amazing work. Nite combines all the things we love about Miami (vibrant color gradients + 80s beach town souvenir vibes) into text-heavy, playful works. We left some with fun swag (i.e., a Favela Beach ‘wet’ t-shirt & handmade pastel pill earrings) & re-energized brains & bodies. It, indeed, felt like home. 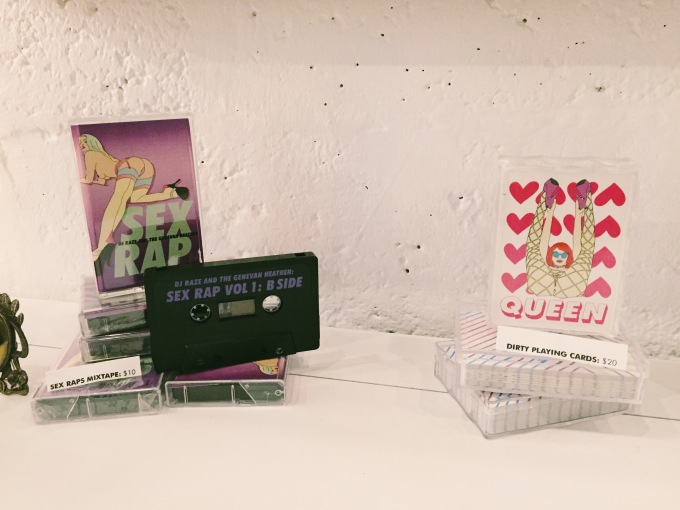 Before sweating it out to Jamie xx & Four Tet at Mana Wynwood, we stopped by Libertine for the Nakid Magazine release party of their Fall 2015 issue featuring cover artist Jen Stark. It was excruciatingly difficult to leave such a glamorous event with complimentary tequila guava cocktails & our mystery dream DJ playing all the jams like Grimes & Chromatics galore, but EDM in a warehouse was calling our name. It is Miami, after all..

Day 3 started off with highly anticipated croissandwiches from La Sandwicherie. Yes, these are important enough to blog about. Their mustardy French vinaigrette & cornichons are maybe the only reason we go to Miami & we’re just using Art Basel as an excuse. If you’ve made it this far in the post, then this is a safe zone & you can be trusted with this bitter, yet flavorful truth. Did we take a photo to show you, you ask? No, we were too busy eating, but Google was nice enough to!

We then proceeded to our favorite satellite fair, Untitled, which transports visitors from touristy Miami Beach into a bright white space cube after passing through its impressive pink entrance. Untitled never disappoints with its collection of contemporary galleries, interesting new work, & also for its lack of slick spectacle art present at a lot of other fairs (think shiny bombs with luxury brand logos, etc.).

This booth in particular featured ‘DTS – Black Neon Abstraction (n*gga you crazy)‘ & ‘Lemme get a fade‘. 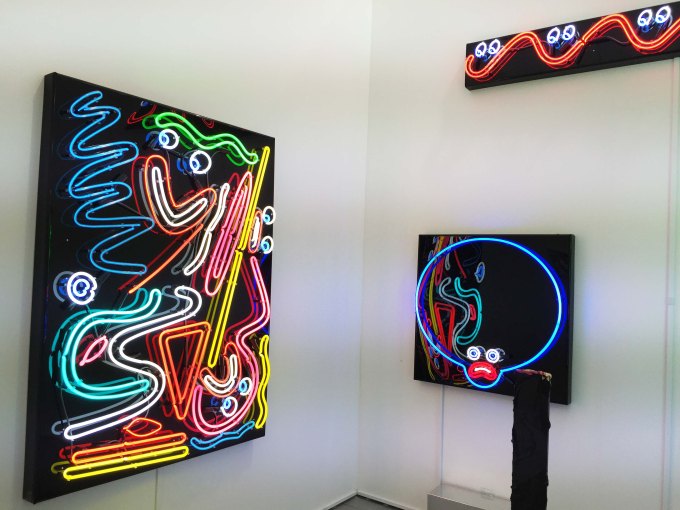 Moroccan born artist, Hassan Hajjaj via the Taymour Grahne Gallery, spoke to our souls with his portraiture pieces influenced by his own North African heritage + the London hip hop & reggae club scene. His use of color, textiles, & repurposed objects built into his frames provide a visual richness while simultaneously addressing stereotypes & the power of branding.

Could not stop staring at this acrylic painting by Josh Reames via Luis De Jesus Los Angeles..

Galerie Antoine Ertaskiran‘s Dominique Petrin‘s trippy display had us wanting to move to Montreal even more than before. Her screenprinted & hand-cut paper installation encouraged viewers to step into the 3D optical illusion ‘room’ that felt more like stepping into an alternate universe. That we would also live in.

Unfortunately we failed to get this artist or gallery name, as we were to preoccupied trying to find Camela. 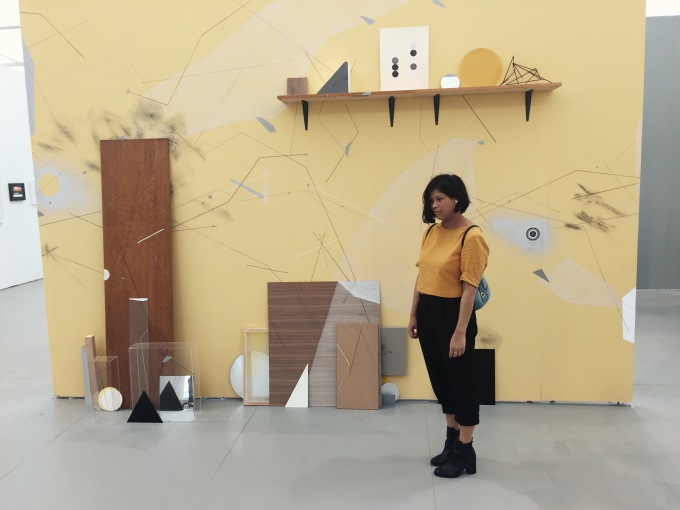 Before heading next door to Scope, we took a needed breather in the Seletti wears TOILETPAPER lounge for their rug launch. Being in a room full of this brand duo’s iconic, fun imagery was certainly a proper farewell to Untitled.

Our last fair of the trip was the shiny satellite, Scope. Here were some highlights: 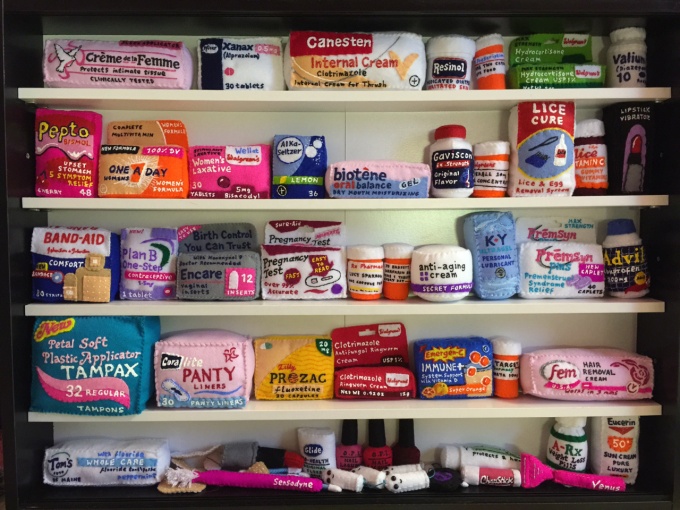 Lucy Sparrow ‘His N’ Hers’

Are you still with us? This is where we wrap up our trip! Our final night in Miami was spent with Ghostface Killah at the Deauville Beach Resort in their VIP room, then back to Mana Wynwood for A$SAP Rocky & Kaytranada (with a surprise performance from Pusha T), & ended back at Baby’s All Basel with DJs Venus X, Total Freedom, & Sadaf.

All in all, the trip was epic. Perhaps next year we will better channel Future like ‘I’m on Pluto, I’m on Mars at the same damn time’ & try our best to not miss a beat. Maybe Uber teleport will be a thing? Oh yea, shout out to all of our Uber & Lyft drivers for keeping us safe during AB15! Until next time! x